At the Schouten family farm, around 150 calves are born every year. Gertie is a dedicated carer, who focuses huge attention on the colostrum, and uses CAIR milk powders from the very start. “Not because we have experienced ­problems, but because we only want to give our calves the very best. They are after all our future.”

Calf rearing at the dairy farm owned by the Schouten family in Berlicum is a success. Thanks to the efforts of Gertie Schouten. It all starts with the colostrum that the calves are given as quickly as possible following birth. “I always check the quality with the refractometer,” explained Gertie, confirming that wherever possible, she looks for BRIX values of 25 or higher. “That guarantees the best resistance level in the calves.” If the values start to fluctuate or even fall, she immediately notifies her husband Remco. “A change to the diet for the dry cows has an immediate effect on the quality of the colostrum.”

Following their first milking, the cows produce 5 to 6 litres of colostrum, enough for our calves that are a cross between Montbéliarde, Swedish dapple red and HF. “The calves are extremely vital and on their first feed drink around 4 litres of colostrum,” explained Gertie, who described her calf care method as TLC, “Tender Loving Care.”
After two days of colostrum, the calves are switched to Nutrifeed Power CAIR powder milk, prepared by Gertie in the milk shuttle. “It’s all about working comfort,” continued Gertie. “Trying to feed all those calves with buckets would destroy your shoulders. A milk shuttle combined with the milk bar for the calves makes life much easier.” Another advantage of a milk shuttle of this kind is temperature control. “The ideal situation is preparing the milk at 42 degrees. The shuttle helps make sure that the milk that is fed is never too hot or too cold.” 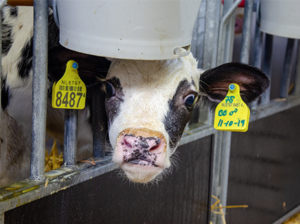 For the first two weeks, the youngest calves are placed in individua

l pens. They are then brought together in groups of five or six. “With a maximum age difference of two weeks, because here they are fed via the milk bar. They all drink at about the same speed,” explained Gertie. “The groups of calves are sometimes smaller as a result. Our principle is all-in and all-out. In other words, the group sticks together throughout the milk period.” That brings a degree of calm to the batch, also during weaning. “We reduce the volume of milk and wean our calves at around 9 weeks; the entire group in one go.” 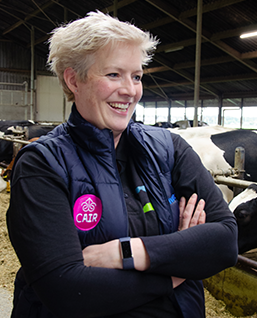 If temperatures fall below 15 degrees, Gertie starts handing out bodywarmers for the calves. “I keep at it until the age of four to five weeks. It helps the calves retain their body heat and when the bodywarmer is removed, they have a delightfully shiny coat.” This Gertie thoroughly enjoys. “The eventual goal is to produce healthy, productive heifers that are ready to calve below the age of 24 months.”

You can use the CAIR innovation from Kalvolac to optimally support the health of calves. These milk powders, in addition to the standard ingredients, also contain a blend of herbs and essential oils that support the airways of calves.

Respiratory health in calves at the Rotteveel farm in the Netherlands

For dairy farmer Remco Rotteveel, from The Netherlands, is the respiratory health of his calves extremely important. In the past, he has experienced respiratory infections that cause a lot of…

The future of dairy farming starts with the calf

The dairy farm of the Hoekstra family comprises father Anne, mother Lianne, son Marco and daughter Eline. Plenty of cows, but limited young stock. For many dairy farmers, that is…

Jan van der Werff, a dairy farmer based in Ravenswood in Friesland, switched from cow’s milk to calf milk replacer around two years ago. The biggest difference according to Jan…