Colostrum: of life-saving importance for every calf 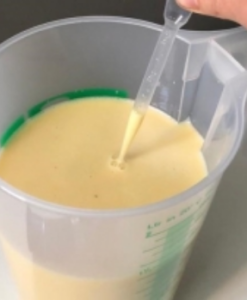 A newborn calf is vulnerable. It has no natural antibodies and during the first few weeks, the calf’s immune system is still insufficiently developed to fight off infection in the intestine (diarrhoea) or lungs (pneumonia). For that reason, calves must be fed colostrum as quickly as possible following birth. Colostrum contains high concentrations of antibodies (IgG) that protect the calf. The colostrum also contains energy, protein, minerals, vitamins and substances that have a positive influence on the development of the small intestine.

Make sure that your calf receives at least:

High-density colostrum is rich in antibodies. You can also use a so-called refractor meter that measures the refractive index. That index is again a measurement for the IgG content of the colostrum. Good-quality colostrum can be frozen and therefore remains available for other calves. Do not defrost colostrum in a microwave, but simply warm it up gradually (au-bain-marie).

Poor-quality colostrum is often a result of the ration fed to the pregnant cows during the dry period. In an ideal dry period, a cow maintains her take-up of dry matter up to calving day. However, this is only possible if the cow has access to tasty rations 24 hours a day. The quality of the colostrum is also influenced by the raw protein content of the rations and the number of minerals and vitamins available.

If despite all these measures diarrhoea and airway infections regularly occur on your farm, request an appointment with the young stock ­specialists. They will help you analyse your management: from the dry period through to the provision of colostrum and from hygiene to accommodation.

After reading this article you may be interested in these articles:

home • News • Colostrum: of life-saving importance for every calf